Investor's guide: practical tips for registering a company in Brazil

Brazil is the largest country in South America and the world’s 6th largest economy by GDP. It is also home to the world’s 5th largest population, with a GDP per capita of $11,600. Recently Brazil has been the host of the olympic games and Football World cups, which has taken place in Rio de Janeiro. This means that there has been a huge amount of investment in the country, with a number of football stadiums being upgraded and built new. Which has boosted the brazilian economy even further.

However, setting up a company in Brazil is not as simple as in most developed economies. The process of registration (and deregistration) contains various procedural steps that are time-consuming and formalistic. Below are the key issues you will need to consider once you decided to register a Brazilian company.

How to register a company in Brazil?

There are many types of companies which can be registered pursuant to Brazilian law, the most common being:

A Brazil LLC can be setup with a minimum of 2 shareholders and 1 director, who can be of any nationality. However, a Brazilian permanent resident must be appointed as a legal representative of the company. The minimum share capital required will be US$1 and the company can be set up within 20 weeks. Furthermore, a Brazilian LLC faces no restrictions on the type of business activities it can pursue; each Brazil entity must have at least one individual representative ordinarily resident in Brazil.

This is most complex type of company to make in Brazil. Corporations are the only option if you want to register a company into the financing sector in Brazil. There's no minimum capital requirement, however 10% of the capital must be declared at the moment of the constitution. It requires at least 2 shareholders and 2 administrators: foreign shareholders are allowed, however a legal representative must represent them; foreign administrators must have permanent residency in Brazil.

Branch of a Foreign Company

Establishing a branch of a foreign company requires a special authorization issued by the Ministry of Development, Industry and Trade (MDIC). Historically this authorization has been issued on an exception basis. The company must operate in Brazil under the same name as in the country of origin, and it must retain a permanent, fully responsible representative, whose name must be registered.

Unless there is a substantial tax advantage in the investor’s home country, the disadvantages of a branch probably outweigh the benefits. It is more difficult to establish a branch, which takes about six months, and the establishment costs are nearly the same as for other business forms.

Corporations are the most formal type of company in Ecuador. Its capital is divided by negotiable amounts of shares. It is formed by a contribution from the shareholders who have influence according to the size of their shares. We can denote the following details: a) It must have a minimum of two shareholders with no maximum limit; b) The minimum capital is USD $ 800; c) The legal representation of the company correspond to a General Manager assigned by the General Assembly of Shareholders.

Compared to Corporations, limited liability companies are not allowed to operate in the finance system of Ecuador (banks, insurance companies, etc). Also the modifications to their social structure are less burocratic than Corporations, this way they are easier to manage, making them one of the best options for a formal company in Ecuador.

The details of this type of company are the following: a) It's ruled to have a minimum of 2 shareholders with a maximum of 15; b) The minimum capital is USD $ 400; c) Same as Corporations, the legal representation of the company correspond to a General Manager assigned by the General Assembly of Shareholders. 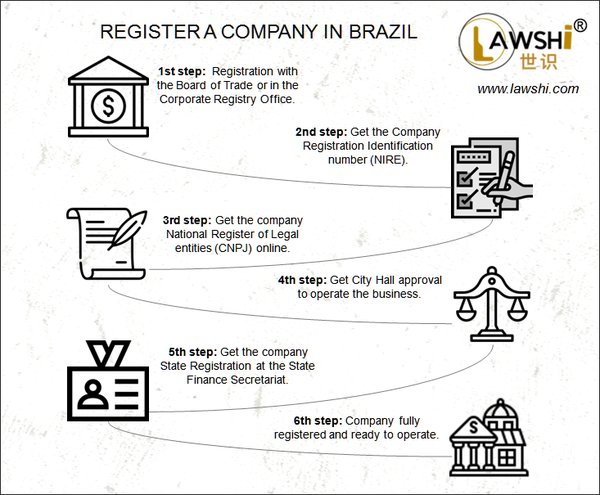 · Registration time is 90 days in average.
· A local administrator is needed. It can be brazilian person or entity, or foreigner person with permanent visa.
· An experienced lawyer guidance is a must to avoid delay in the process.
· All foreign documents must be notarized and legalized by the consulate or embassy in Brazil. The documention should also be translated into Portuguese by an in-house translator, this does not necessarily rule out the services of a private translator.

Lawshi lawyers work across sectors and countries in Latin America to deliver advice to you wherever you operate. Our focus is on helping you mitigate risk and benefit from innovation, enabling your business or organization to thrive. If you have any queries about the business opportunities in your country of interest or anything to do with a specific Latin American industry, do not hesitate to get in touch with us at service@lawshi.com.