Practical tips to register a company in Mexico

Which types of companies can foreign investors register in Mexico?

In Mexico there exists three types of commercial companies that can be registered, of which the most recommendable, from an operational and corporate point of view, are the ‘Sociedad Anónima’ (Corporation) with a Variable Capital modality, or the ‘Sociedad de Responsabilidad Limitada’ (Limited Liability Company), with the Variable Capital modality as well. And a simple type of company called SAS, which allows the investor to register a company quickly to comply with Mexican regulations and be able to consolidate the investment.

The difference between them depends on the corporate intention that the investor has when arriving in Mexico. SAS is the simplest company, and the fastest and easiest to handle, however it does not allow to be so flexible with respect to the bylaws and also it has an annual profit limitation, therefore it is only recommended for small or medium-sized companies that do not require specific controls in their registration.

If it is necessary to include strict rules in the constitution of the company, it is recommended to register a limited company (SRL), which must be registered in the traditional way and it's easier to manage than Corporations. Limited companies differs from Corporations (Sociedad anónima) on a special factor: only companies registered as Corporations are capable of registering as financial entities. In the next segment we will be explaining the characteristics of each of these in more detail.

It should be mentioned that, depending on the corporate purpose of the company being registered, there may exist certain restrictions imposed by the Mexican Foreign Investment in relation to direct participation of foreign capital in Mexican companies. Nevertheless, these restrictions are very limited and generally only apply to companies with activities concerning certain sectors and industries considered of national security and importance. 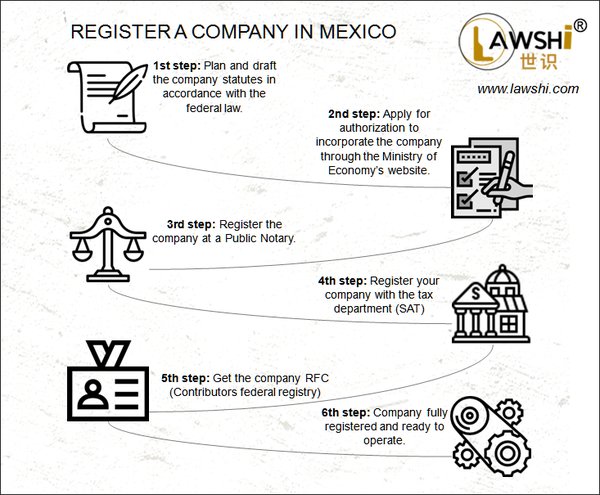 b) The law requires a minimum of two shareholders and does not provide for or require a limit about the maximum of shareholders. As already mentioned, there is not a limit about the amount of foreign investment in the social capital when the company is going to engage in import, sale and lease of heavy machinery. The shareholders, except in special circumstances, are only responsible for paying the nominal value of the shares they subscribe.

The shareholders are only joint and severally responsibility with the company, in the part of the tax interest that does not reach to be guaranteed with assets of the own company, when such company has incurred in any of the following assumptions:

In the aforementioned three cases, the responsibility of the shareholders shall not exceed the participation that each of them has in the social capital of company during the period in question.

d) Supervision of the Sole Administrator or Board of Administration shall be entrusted to a Statutory Auditor, who is usually a partner of the external auditing firm used by the company or the external accountant.

e) The highest authority of the company is the Shareholders' Meeting. The shareholders' meetings are ordinary and extraordinary. The extraordinary meetings take place to deal with the matters that the law refers to them, as well as any others for whose resolution the statutes establish a special quorum. Shareholders' meetings must always be held at the registered office/social address, except in case of cause or force majeure. Shareholders may adopt resolutions without meeting, provided that they do so unanimously and that they do so in writing.

f) The bylaws allow an adequate regulation for the business that you propose to carry and also allow flexibility. ‘The Sociedad Anónima’ is registered before a public notary and the Articles of Incorporation must contain at least the following:

g) The company shall open and keep following corporate books:

h) The company shall be subject to the standard tax regime applicable to all closed companies. The Mexican Income Tax taxes the profits of the company, establishing a regulation relative to income, as well as allowable deductions, and the result is taxed at a maximum rate of 30%.

i) In addition, the Mexican Labor Law imposes an obligation on companies that have been established for more than one year to give their employees a share of the company's profits. This participation is approximately 10% of the profits obtained by the company before taxes. The amount corresponding to the workers' participation in the profits, is not deductible for the purposes of Income Tax. In this regard, it is convenient to consider the use of an outsourcing company to act as the employer, even when the above has almost completely lost its usefulness in Mexico when the outsourcing and beneficiary companies are related, in light to recent reforms to such Labor Law.

a) The social capital is not represented by shares, but by social interests that are not considered debt securities/credit titles;

d) The administration of the company is entrusted to one or more managers, who do not need to be partners;

f) The surveillance is entrusted to a Surveillance Committee formed by partners or strangers to the company. It is also common to designate a partner of the external auditing firm or the external accountant as the person in charge of the Surveillance;

g) The tax regime and the labor regime are similar for both companies.

The SAS will have a number of characteristics that mark a significant break from current Mexican corporate practice:

- The SAS may be formed without the participation of a notary public, thus significantly lowering the cost of creating a new company, since the fees charged by notaries often constitute the largest part of the cost of forming a company in Mexico;

- It will be possible to create an SAS in just one day, since individuals will be able to create the company directly by utilizing an online system to be run by the Ministry of the Economy. This system will provide them with approved clauses for their governing documents which they may choose among;

- The Ministry of the Economy will file the approved governing documents electronically with the Public Registry of Commerce;

- The administration of the SAS may be carried out by electronic means, if the shareholders agree to it;

- The SAS will be obligated to file annual reports electronically with the Ministry of the Economy which reveal the financial situation of the company. The failure to file these reports during two consecutive years will lead to the company’s dissolution; and

- The SAS will not have to separate five percent of its annual net profit as a reserve fund, unlike other types of entities.

As with other types of entities, the SAS will be governed by its shareholder or shareholders through physical or electronic meetings.

The SAS will have a number of limitations designed to prevent its use by mid-size or large companies:

- To begin with, all shareholders must be natural persons who have an electronic signature issued by the tax authorities.

- Moreover, none of those natural persons may also be controlling shareholders of another type of company, effectively eliminating the use of the SAS as a subsidiary of an existing company.

- Third, the SAS may not have a total annual income greater than five million pesos. If it exceeds that figure, it must be transformed into a different kind of entity.

- Fourth, all shares of an SAS must have the same value and must confer the same rights on their holders, thus eliminating the possibility of creating different classes of shares.

The result of all of these restrictions is to ensure that the SAS is only used as a vehicle to operate fairly small businesses, including start-ups. Even so, the amendments to the LGSM are noteworthy in that they represent a revolutionary break from the past in quite a few areas of Mexican corporate law orthodoxy. If these new ideas work out in practice, they may eventually spread to the more long-established entities in the Mexican corporate world.

The legal regime for the Sociedad Anónima also applies to the Multipurpose Financial Company (SOFOM). Nevertheless, and to the extent that the main activity of the Mexican company involve financial services such as grants and financial leasing, the SOFOM may provide the following benefits:

a) The certified balance statement prepared by the SOFOM’s accountant is considered as an accurate and truthful statement in court for determining the amount that the debtor owes to the company.

b) The certified balance statement prepared by the SOFOM’s accountant is considered a commercial enforceable document (título ejecutivo mercantil), which allows to demand payment in court in an expeditious proceeding.

c) SOFOM corporations are allowed to deduct losses incurred from the impossibility to recover payments arising from loans or leasing when it may be proved that such payment from the debtor is not possible.

d) SOFOM corporations are exempted from paying the Value Added Tax corresponding to the granting of loans or factoring;

The benefits set forth in subparagraphs c) and d) are only allowed when the SOFOM’s activity arising from financial leasing represents 70% or more of the accounts payable, assets or annual income of the company. Nevertheless, it is possible to obtain a resolution from the Service of Tax Administration (SAT) where such entity determines a lower percentage to the one above mentioned for the first three years of registration, considering it is a SOFOM of recent creation. For such purposes, the SOFOM should prepare and deliver the Service of Tax Administration a compliance program.

Furthermore, even though SOFOM companies are not supervised by the Mexican Banking and Exchange Commission (Comisión Nacional Bancaria y de Valores) it is required to obtain a favorable opinion from such entity in connection with its Articles of Incorporation & Bylaws, as well as register the company before the Providers of Financial Services Registry System (Sistema de Registro de Prestadores de Servicios Financieros).

This modality applies for the three above mentioned type of companies. The companies that adopt this modality establish a fix minimum capital and a usually unlimited variable capital. The decrease and increase of the fix minimum capital requires a formality of probate before public notary that formalizes the aforementioned and, requires the registration in Public Commerce Registry.

Lawshi lawyers work across sectors and countries in Latin America to deliver advice to you wherever you operate. Our focus is on helping you mitigate risk and benefit from innovation, enabling your business or organization to thrive. If you have any queries about the business opportunities in your country of interest or anything to do with a specific Latin American industry, do not hesitate to get in touch with us at service@lawshi.com.

Types of companies in Mexico